The legendary Skeleton Bay surf spot is considered the longest sand-bottomed left hand wave in the world and only came into the surf world’s radar back in 2008, although a handful of South African surfers such as Grant ‘Twiggy’ Baker had reportedly made the journey a few year prior. 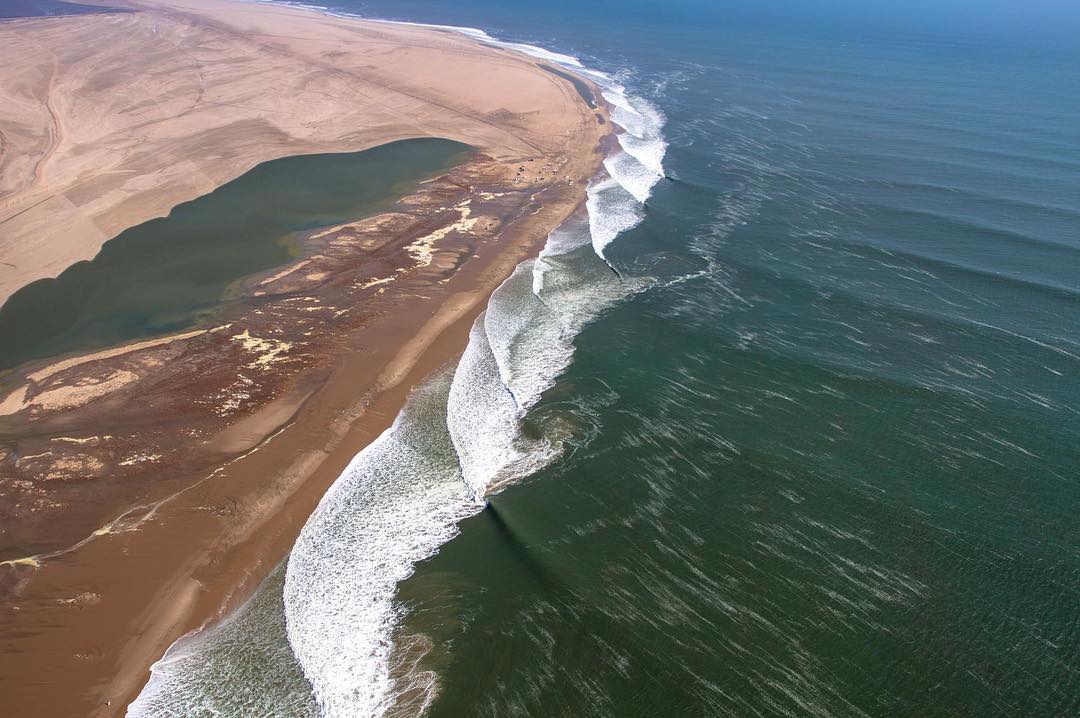 Wave: Left hand sandbar/point break
Where: Skeleton Coast, Namibia, South-West Africa
When:  All year, best during the European summer months
Why: Considered the longest and best left hand wave in the world, 6 barrels on one wave is not uncommon out here!
Bottom: Sand
Tide: All

Weather: Namibia has a dry climate typical of its desert landscape with the days feeling hot with highs between 27 -35ºC , yet the strong sea breezes keep temperatures bearable. The evenings are a different story as it can get extremely cold at night, with coastal temperatures dropping to 0 - 5 ºC.
Morning fog occurs nearly 340 days a year and the water temperatures fluctuate between 14 - 20ºC You’ll need a 3/2 full suit from Dec-April and maybe a 4/3 and boots during the winter. 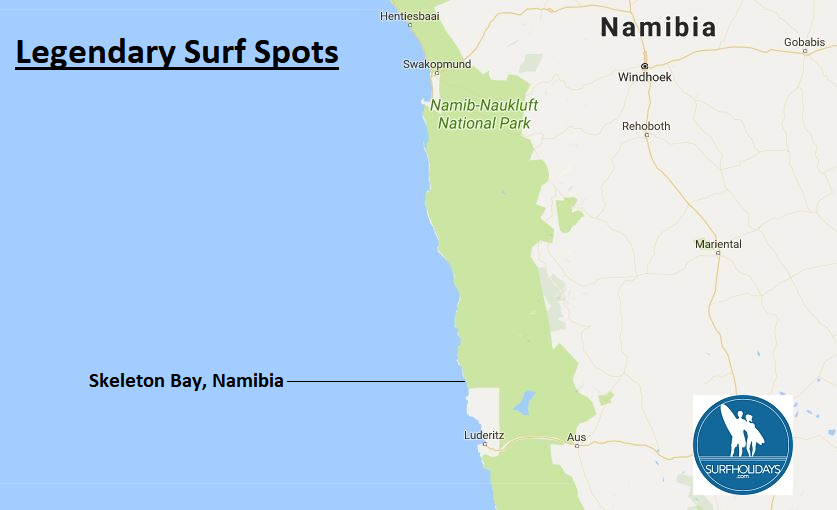 In 2008 Surfing Magazine ran a historic competition to find the new waves called the ‘Google Earth Challenge’ with the winner getting the chance to head to the chosen locale with Cory Lopez, Peter Mendia, Hank Gaskell and Mitch Coleborn.

The resulting trip blew everyone away, and the images of Skeleton Bay’s mind-bending walls were hard to comprehend, these were the waves you drew on the back of school books, and now here they were in real life. 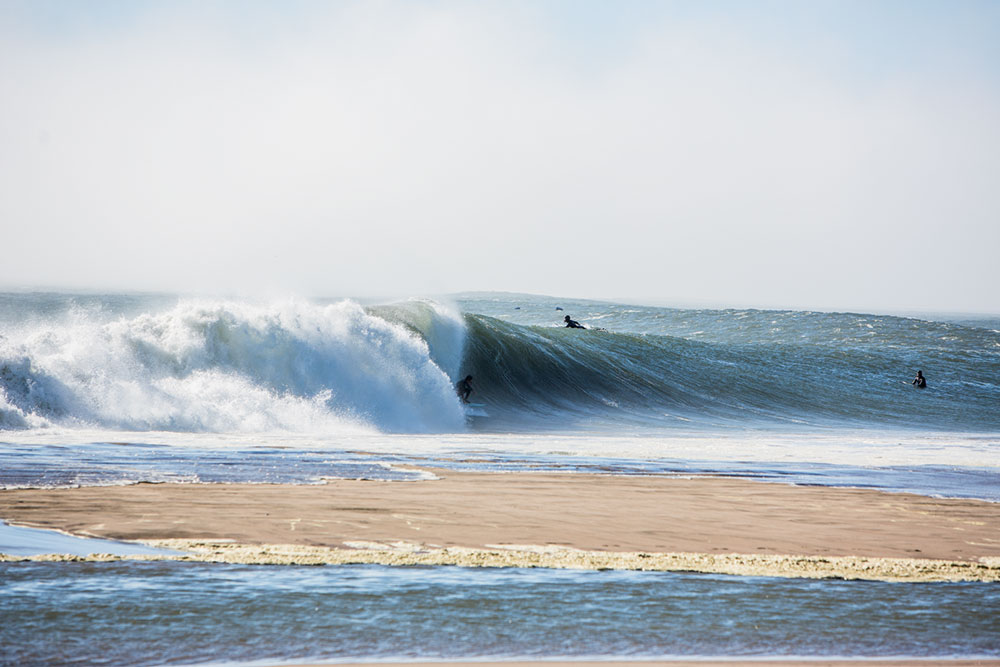 Skeleton Bay’s leg burning rides are believed to have only turned on at the end of the 70’s when Namibia's predominant south winds altered by 20 degrees, which in turn changed near-shore currents and sand movement.

This caused a nook along the coastline and allowed sand to collect, forming the ridiculously long sand bank point that we know today.

Koa Smith shows you how to surf Skeleton Bay below.....1 wave, 8 Barrels!!

How to get to Skeleton Bay

Located along Namibia’s isolated and hostile Skeleton Coast, which is roughly a 6 hour drive from the capital of Windhoek, Skeleton Bay is not your typical surf holiday destination, with the only options to rest your weary body after a day surfing Skeleton Bay being a tent on the beach, a floor space at a locals house or a very basic guest house.

Ideally you rent a guide to take you to the wave, or even better, a guide with a 4x4! It’s all about the surf here, there is literally nothing else to do except watch the waves and the local seal population and other animals that roam the beach such as hyenas and coyotes, before sitting around the camp fire, getting ready to do it all again the next day. 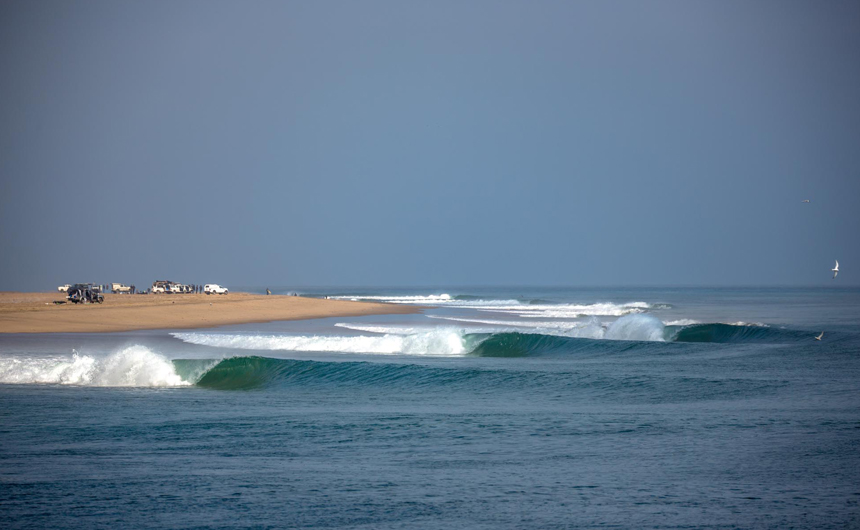 When the swell and wind come together you’re legs better be up to it, as it’s all about impossibly long barrels out here, churning out the fastest and thickest sand-dredging tubes on the planet, so forget about turns and tricks.

Paddle, jump up, pull in and get ready for the longest ride of your life! 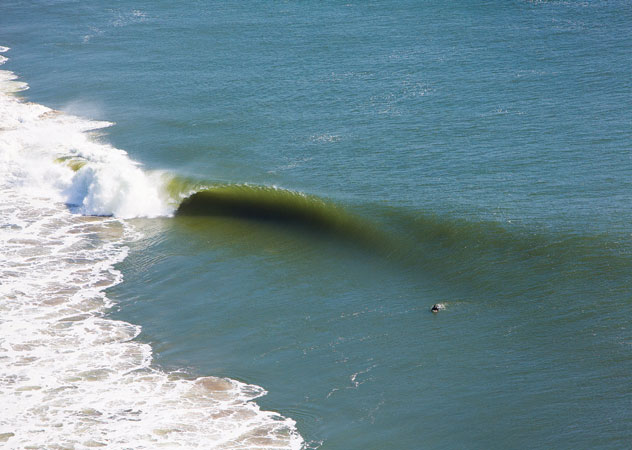 The wave is without a doubt for experienced riders only as the break, like most Namibia surf spots,  Skeleton Bay surf conditons are influenced by extremely strong tidal rips, brisk offshore winds and the seemingly never ending walk back to the top of the point, one recent surfer clocked up 18 miles in one day from walking back to the take off spot after each ride!

This is due to the locals now enforcing a no ‘4×4 back to the peak’ policy, which we think is a great rule to have in place as we can only imagine how annoying it would be to see big-money pros getting driven back up the beach after each ride as you trudge along the sand!

To spur you on to take a Namibia surf trip, press play to see Skeleton Bay from the sky on the video below.

Determined to surf an epic long left but Namibia is way too hard to get to?

Here's Pavones, Costa Rica, the longest left in the world....