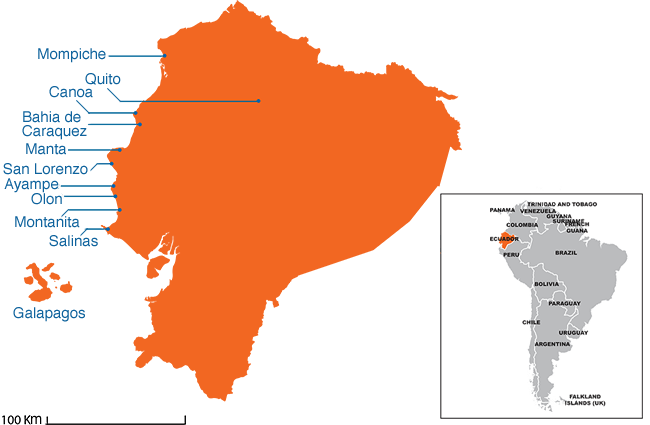 History of surfing in Ecuador

In the 1960s, legendary Peruvian surfer Piti Block visited the coasts of Ecuador in search of new, undiscovered waves and hit the jackpot; reef breaks, points and fantastic beach breaks, all to himself.

He caught the eye of the locals and started teaching the basics to a few people before meeting up with Luis Estrada, Victoriano Posada, Dorothy Jurado and Christian Bjarner, who dove headfirst into the sport and kept it alive in the area after he left.

The 1970’s saw the sport wane a little, before a new fevered interest began again in the mid 1980’s which has never slowed down. This led to Ecuador surfing becoming host to multiple international competitions which saw pro’s showing high level surfing at its best, spurring the locals to up their game. You’ll now find Ecuadorians surfing waves with the same ability as you would on any beach in Hawaii and Australia.

The Ecuador surf season is from October to April, when NW swells generated by winter storms in the North Pacific Ocean and NW-SW combo swells start to pour into the Ecuadorian coastline.

What makes Ecuador such a great destination for a surf holiday during this time is that the winds are either non-existent or offshore along the entire coast, making for truly fun conditions for surfers of all abilities.

Ecuador surf spots have become well known in the surfing world for their incredible variety. Goofy foot or regular foot- it doesn’t matter, there is an equal proportion of rights to lefts, points, rock reefs, jetties, river mouths and beach breaks, making it the ideal destination for someone who has never been on a surfboard before or an intermediate ready to take their skills to the next level. In general, the breaks are very tide sensitive.

The 2-metre tidal range will make or break a lot of the spots. Additionally, spots are heavily direction sensitive and swell dependent, some being magnets for swell and others needing larger swells to start producing the best conditions. With Surf Holidays you’ll be with the best instructors and guides, who, armed with their local knowledge and expertise, will take you to the best Ecuador surf spots.

Direct flights to Ecuador’s international airports in Quito in the north and Guayaquil in the south depart from a relatively small number of places outside of Latin America, so you will have to get connecting flights.

In the United States, regular services leave from Miami, Houston and Atlanta, whilst in Europe, they go from Madrid and Amsterdam.  There are numerous cheap flights connecting the international airports to regional airports near the coast for under $100, that take around 45 minutes. For the more adventurous of you out there, you can take buses that take 6-8 hours through stunning scenery.

Where to surf in Ecuador

1. Mompiche:
Ecuador's most famous,and arguably best, left point break that springs into action in big NW swells which Ecuadorian and visiting surfers swarm on when it fires. Luckily, it is remote enough to still catch it with hardly anyone out on smaller days and the areas surrounding waves are deserted, with many beach break peaks to choose from and some of the best Ecuador surf spots on offer.

The northern zone extends from Bahia de Caraquez through to Canoa and then north to the Mompiche area in Esmereldas province.  Mompiche armed with its world class surf and 5 mile stretch of pristine sands has made it the go to choice in the northern zone. Its charm lies in the fact that it remains untouched from the outside world, life is slower here and that’s what we love about it. You only see a few cars on the road and everyone around town knows each other, lending to a real sense of community spirit in the area.  In between surfs expect to lie in your hammock, seeking shade beneath a palm, before getting dragged into a game of football on the sand with the local kids.

2. Canoa:
The Canoa zone has river mouths and sand points that come alive on NW swells and produce fun and long waves over a sand bottom that are perfect for beginner surf Ecuador trips, as it has long walls and a forgiving bottom.

For those with intermediate surfing skills you will have a host of point breaks to choose from, such as the right handed Canoa, as well as some steeper walled reef breaks to pick. Canoa itself is a great place to base your Ecuador surf holiday. The town's social life takes place at the Surf Shak, which is a bar, restaurant, surfing school and gear shop all rolled into one. The managers even offer a bartering system for traveling surfers, exchange an old board, bartending or cooking skills in return for a bar or restaurant tab!

3. Bahia de Caraquez:
Bahia is not normally a major surf town except on giant SW swells when it has one of the best left point breaks in Ecuador, perfect for goofy footers of all abilities.

A very clean and eco-friendly city that is hugely popular as a holiday destination for Ecuadorians. The Mediterranean style houses and buildings are a joy to get lost among, and along the way you can stop for delicious Ceviche and Churrrasco which is fried beef, eggs and potatoes served with vegetables, avocado and rice. The perfect base for getting the most out of your Ecuador surfing holiday.

4. Manta & San Lorenzo
This area extends from Manta, where you can fly into from the Ecuadorian international airports for very little money, all the way to the south facing end of the San Lorenzo Cape.

Here the coastline faces due North with a dead-on exposure to winter northwest swells at several points and jetty breaks out to the San Lorenzo Cape. This is a rugged zone containing a series of remote points and reef breaks which work on a wide variety of swell directions and tides, with varying wind protection.

Finally, the south facing end of the cape contains some of Ecuador's hollowest beach breaks and river mouths, making for an otherworldly Ecuador surf experience.

The Central Zone has the most uncrowded Ecuador surfing experience. Here on any given day you can regularly expect to surf with almost no one, but this zone also has the most difficult access and hard to read conditions, so potentially you could waste a lot of time here checking spots for nothing, making local knowledge and experience crucial to scoring waves.

5. Ayampe
Located in the Baja Manabí region of Ecuador which is known for its bio-diversity and undisturbed beauty, including the famous Los Ahorcados rock formations that add to one of the most spectacular sunsets to be seen on the Pacific coast.

Much less a party town than Montanita, 30 minutes away, Ayampe has made a point if differentiating itself and is made up of a number of clean and colourful streets lined by flowers and nicely constructed buildings.

An Ecuador surf holiday in this area can include an array of other activities such as bird watching, whale watching, riding horses along the beach and mountains above, hiking through the trails, scuba diving, enjoying a yoga class or tasting the local cuisine. There is truly something for everyone, and plenty to do when your arms are too tired from surfing at Ayampe, which produces beach break waves 300 days a year!

On a North swell, a nearby right hand point break that peels for 200 yards offering an inside section that barrels, the perfect platform to take your surfing to the next level on your intermediate surf Ecuador trip. The remoteness of this region mean you’ll be enjoying your Ecuador surf resorts with little to no crowds, meaning you’ll get the most of your time in the water, with the only restriction to the amount of waves you catch being your paddling power.

This area includes the popular beaches of Las Salinas and Montanita which are best on SW swells but some also work very well on NW.

6. Las Salinas
Las Salinas is the backyard for Guayaquil based surfers (Ecuadors largest city) who are only 2 hours away. It's also a very popular holiday destination among Ecuadorians, especially newlyweds!

The coastline around Las Salinas here is indented and has a variety of points, reefs, jetties and beach breaks that offers waves for riders of all abilities and is home to some of the best Ecuador surf breaks.

Surfing in Salinas is engrained in the culture and you will find numerous surf shops and surfing schools as you walk along the Malecon boardwalk. Salinas also holds national and international surfing competitions such as the Quicksilver World Junior Championships in 2009.

At the southern end of Salina’s bay you’ll find Chipipe, a beach that offers great waves for beginner surfers as they wall up slowly and don’t break with the power that the majority of Mexican beach breaks are known for. The northern end is simply known as Salinas Beach, and depending on swell direction can produce great left and right peaks for surfers of all abilities.

7. Montanita
Surfing in Ecuador revolves around Montanita. It is Ecuador’s surfing mecca and home to some of the best Ecuador surf camps. Montanita is a booming party town loved by international backpackers, holidaying Americans and locals alike. The break itself is a magnet for swells from the north and south and provides rippable walls for surfers of all abilities, a great beginner surf Ecuador spot.

A small mountain to the north called “The Point” separates Montanita from the more peaceful beaches of Olon. A great activity to do in between surfs is to hike up to the top and take in the incredible views of the surrounding ocean and beaches.

Head to Manglaralto which means “high mangrove,” that gives you great opportunities for fishing and exploring in between sessions on your Ecuador surf holiday. The lush hills that surround Montanita can be explored on bike or horseback, as well as on foot.  Many travellers hike or bike the few miles to the waterfalls at Two Sleeves and Olon. Wildlife, such as exotic birds and turtles, can also be seen at the Valdivia Aquarium and nearby Machalilla National Park.

Surf Spots in the Galapagos Islands

The Galapagos are an area of volcanic islands distributed around the equator in the Pacific Ocean and are 500 miles from the mainland coast of Ecuador.

San Cristobal is a favourite spot in the Galapagos for surfing, where the surf is from both the North and South Pacific, and the “surf season” is from December until May. Known for its exceptional and abundant array of wildlife, it’s a fantastic place to visit for nature lovers and surfers.

In between surfs head out and spot the native iguanas who have no concern for the clicking of cameras and lay out in the sun to warm up, you’ll only see this kind of wildlife when on surf tours in Ecuador.

Situated on the equator means a stay in an Ecuador surf camp will be a delightfully warm experience, all year round! Weather is tropical along the coast, becoming cooler inland at higher elevation.

As you travel towards the Amazonian jungle lowlands it becomes tropical once again with high humidity. Along the coast you can expect lows of 24°C and highs of 31°C during the hottest months of the year.

The water temperature ranges from lows of 22°C to highs of 26°C, whilst the Galapagos Islands can also experience lows of 19°C, but very rarely. You should pack a spring suit and a 1mm top just in case, but board shorts and rash shirt will be enough for most.
----

Read about Surfing in Ecuador from our blog:

View all our blog posts on Surfing in Ecuador