Home to some of Portugal's most consistent surf beaches, Peniche lies 90km's north of Lisbon (1 hour's drive from the airport). The town is know as being home to arguably Portugal's most famous wave - Supertubos.

On the other side of town is an area called Baleal and its beach Cantinho da Baia, one of Portugal's best beginner and intermediate surf beaches - one of the main reasons people come to surf Peniche. It is here that some of the best Peniche surf camps are located, all within a 2km stretch of road facing out onto the beach. So no matter where you are staying you can easily just walk to the surf.

A surfing holiday in Peniche will be all about spending time surfing, relaxing on the beach and chilling out on the beach bars such as Bruno's. The main town is not as big as attraction as the beaches. The accommodation option are all generally a short stroll from any beach meaning you can surf for as long as you want without having to drive. Its an ideal surf holiday option for groups, couples or solo travellers.

The WSL Surf tour comes to Peniche every year in October for the Rip Curl Pro. It's always a great week, watching the worlds best surfers such as Kelly Slater & Gabriel Medina battle it out to win the event. A great time to visit (temperature still 22-25 degrees) and the surf is always consistent. Have a look at some of the options we have be it self catering accommodation or a Baleal Surf Camp or Peniche Surf Camp and spend the week surfing some of Portugal's best beach breaks..
+ More

Villa with amazing ocean view and a view across the bay of Peniche. The villa sleeps 13 persons and includes a swimming pool, 1 private double room with private...

Bukubaki Eco Surf Resort complements the best of surfing experience in a familiar atmosphere with an ecologically committed glamping accommodation, based on the...

The Maverick is a Surf & Yoga Resort in Lourinhã / Portugal, one hour north of Lisbon and 15 minutes south of Peniche. Your stay is an entire exp...

A typical Portuguese summer house converted into a surf house overlooking the Ocean. The house can accommodate up to 20 guests in 4 splendid private rooms an...

The Hostel is set in the historic centre of Peniche, in one of the largest traditional fishing villages in Portugal and a major hub for surfers, one of Portugal...

Captain's Log House is a hostel based in Baleal, but is also a spirit, an identity. The hostel has a unique interior made by art students of Lisboa. This is whe...

This stunning villa is set on the picturesque Bom Successo golf course. It overlooks a lake and the twelfth hole of the course. The villa has a large living...

The H2O Surfguide Hostel is a cozy home feel surf hostel located 300 m from the beach and in the center of Baleal, Peniche,one of the best surf destinations in ...

Boa Onda Guesthouse Peniche comes from our heart, from the concept of being together and sharing something special. It all comes from our love for the Ocean, fo...

Select
Peniche is located in western Portugal, about 90 km north of Lisbon and is the largest fishing port in Portugal.

It was an island until the Middle Ages, but it progressively became a peninsula as from the seventeenth century (and therefore a perfect surfing area!!). Legend has it that a group of Lusitanians escaping retaliation by Julius Caesar’s hosts took refuge in the island and founded the town.

Europe’s westernmost city, Peniche has always been linked to the sea and the main economic activities of its residents have centred on sardine, tuna and lobster fishing, together with naval construction shipyards and canned fish industries, and now surfing!

Besides the obvious activity of surfing, there are plenty of other interesting things to do. The town's Fortress is a local and national landmark. The fortress is now a Museum dedicated to the memory of those that have been incarcerated during the time of political prisoners in Portugal before the 1974 revolution.

One of the most interesting things to do is an afternoon boat trip to the beautiful Berlengas Islands - it's also a great area to scuba diving and observe marine fauna as well as shipwrecks.

Close by is the unique medieval village of Óbidos, built in 1195. Definitely worth an afternoon trip - wander around the ancient village walls and in and around the winding cobblestone streets.

In the village of Bombarral is one of the largest Asian Buddhist garden in Europe at Quinta dos Loridos. This spectacular garden hosts a unique collection of sculptures inspired by Buddhist themes. Also next to Bombarral village is a traditional Portuguese vineyard 'Companhia Agrícola do Sanguinha'. For those interested in trying some of the best wines produced in Western Portugal with the DOC Óbidos stamp this is one of the options, the farm's shop is open from Mondays to Saturdays, guided tours to the farm are arranged by appointment.

There's also a large kart track about 10Km from Baleal, a good alternative for a different day

In Peniche just outside the city centre you’ll find the excellent restaurant Tasca do Joel. With it’s gourmet shop where a remarkable wine, Port and Portuguese and Spanish delicatessen can be found at a surprising price, this is definitely a place to visit - its address is 73 Rua do Lapaduço, Peniche

Closer to Baleal you will find many delicious sea food restaurants including Amigos do Baleal, Baia Secreta and Baleal à Vista.

There are numerous bars but the best one is Bar do Bruno right on Baleal beach. In the summer its beach parties go on until the early morning (just don't forget the surf in the morning!)
Peniche is approximately a 1hr drive from Lisbon airport. And two and a half from Porto

How to get to Peniche from Lisbon Airport:

Bus:
Getting the bus is very easy and only cost a few euros:
In Lisbon the bus station to Peniche is called Sete Rios, it is next to the Zoo and about 10-15 minutes from the airport in a taxi. Or instead of a taxi take the Aeroshuttle to Av.José Malhoa Sul (leaves you beside the Sete Rios bus station to Peniche). The Aeroshuttles leave the airport every 30 mins from 08.15-21.30. The Sete Rios bus station address is Praça Marechal Humberto Delgado - Rua das Laranjeiras 1500-543 Lisboa.

Subway - This is also very easy. From the airport take the Redline to Sao Sebastiao. Then get off and take the Blueline two stops north to Jadrom Zoologico which is beside Sete Rios bus station. The subway runs from 6am-1am

From Sete Rios bus station in Lisbon: get the Rede Expressos bus www.rede-expressos.pt to Peniche. The website usually only shows timetables 2 weeks in advance but the bus is year round and goes every one/two hours (first one at 07.00 and last one is approximately 19.30 although in the summer it can be 22.00). Approx travel time: 1 hour 35 minutes. The bus will take surf boards no problem (although if its a long board more than 9ft they might not).

Just as you reach Peniche you call your accommodation and they will pick you up from the bus station.

How to get from Peniche to Lisbon:

Take the rede expressos bus from Peniche to Sete Rios station. First bus is usually 07.00. At the bus stop next to the Bus station get the Aeroshuttle or Subway to the Airport.
The best thing about the Peniche & Baleal peninsula is that the beaches face both north and south, and are all within a few kilometres of each other. So on nearly all conditions there is surf - it is well known as one of Portugal's most consistent surf destinations and a great place for a Surfing Holiday.

The WSL World Tour comes to Peniche every year in October and is a great time to visit if you want to watch the worlds best surfers such as Kelly Slater, Gabriel Medina & Mick Fanning battle it out to win. Surf everyday while watching the event also.

The areas main surf beach is called Cantinho da Baía, its starts in Peniche and ends up in the area knows as Baleal. The spot is famous for its consistency and for being ideal for beginners and intermediate surfers and is where some of the best Baleal Surf Camps are located. Protected from the bigger swell by the headland makes it’s almost always possible to surf here even when there is big swell hitting the coast. The beach stretches 4kms further west with many spots to surf - a great place to get away from crowds.

On the other side of the Baleal headland is Prainha, another great protected surf spot for beginner and intermediate surfers. And next to this is Lagide , a reef break and one of the best surf spots in Portugal if you have big swell and southerly winds. It's a long perfect left with a shallow reef at low tides - great for intermediate/advanced surfers.

On the other side of Peniche (south) is the area's and arguably Portugal's most famous break Supertubos . It's a powerful wave breaking in very shallow sand bar, advanced/pro surfers only! Other waves such as Molhe Leste, Consolação, Porto Batel and Almagreira are all close by giving every kind of alternative including many uncrowded areas; a great area to explore and Surf Portugal's best waves!

And don't forget you can head south and surf Ericeira - less than an hour's drive away.

Come Surf Peniche with us… 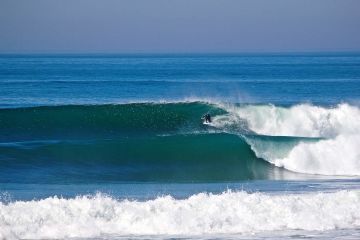 We explore the best surf spots in the Portuguese city of Porto...
read more
2 weeks ago 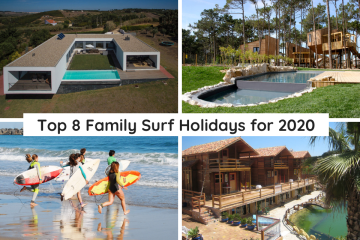 A selection of the best family surfing holidays in Portugal. Learn how to surf while ...
read more
1 month ago 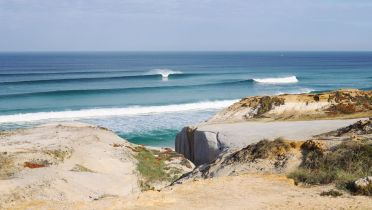 We explore the best surf spots in Peniche for beginners, Intermediates & Advanced ...
read more
1 month ago