The Cascais coastline is arguably the most spectacular in Portugal. The town lies 30kms west of Lisbon facing out onto the Atlantic Ocean. The stretch of land from Carcavelos surf beach to Guincho surf beach takes in stunning beaches, lively promenades, incredible mansions, the famous Estoril Casino, the protected park lands of Sintra and of course the beautiful cosmopolitan town of Cascais.

Cascais town is a lively mix of cafes, bars & restaurants. Its cobblestone streets open out onto a beautiful beach and marina - take in the sunshine by wandering around or just lounge in its beach front cafés admiring the views.

For those wanting to surf Cascais you will find a huge choice...the area has a mix of beach breaks, longboard breaks, point & reef breaks and both mellow & advanced surf breaks. Travel west and you will find the beautiful Guincho beach, a fantastic surf beach with a great bar/restaurant - you may never leave this area. If you do then you will want to check out the beaches on the Lisbon side and discover all the breaks that make Cascais surfing such a great experience.

Comfortable and elegant hostel sited in Cascais, 25 minutes by car from the Portuguese capital. Nice Way Cascais features a garden, a daily breakfast buffet and...

"A refuge in paradise; it is time to return to your breath, body and essence." Guincho Wayra House is situated in a picturesque valley, overlo...

A typical Portuguese summer house converted into a surf house quite close to nature. The house can accommodate up to 20 guests in 7 splendid private rooms, wi...

Our Flat is a perfect solution for couples or friends that are looking for some epic surf holidays in a calm and chill place. There are a Couple bed and a si...

Wonderful beach house with a perfect location, walking distance to the beach, near restaurants, pharmacy, train station and Riviera mall. With a very familiar a...

Select
The coastal town of Cascais (pronounced Cash-ki-sh) is considered the Monte Carlo of Portugal. It has a long history and enjoyed a particularly important development in the 14th century as it became an important stopping point for boats on their way to Lisbon. It also became a strategic military post in the defence of Lisbon. You can see this in some of the old building and fortresses that line the coast - these continued to be built throughout the 15th, 16th & 17th century and still exist today.

In the late 19th century a period of decadence began as the King of Portugal turned the area into his summer residence. It became a hide out for some of the European royal families during the 20th century world wars and its elegance and glamour still remain today.

The centre of Cascais is made up of cobbelstone streets lined with shops, restaurants and bars. There is a large variety of restaurants to suit every taste (including 5 sushi restaurants!) and there are lots of bars that stay open till late.

You will also find a large shopping centre in town with all the usual top brands such as Zara and H&M.

One of the best bars is on Guincho beach, a few kms north west of town: Bar do Guincho. It's located on the far end of the beach, great for food, music and of course the fact that is is on the beach helps!

The Marina area of Cascais has many restaurants and bars - perfect for large groups and the area is a great spot on the weekends.

There are a few good spots along the promenades between Estoril and Cascais - most notably Tamariz beach bar and nightclub - fantastic spot to spend the evening looking out over the beach.

The most impressive tourist attraction nearby is the Sintra Palace. The area north west of Cascais is a protected National Park and contains the spectacular 19th century Palace. The park also contains an 8th century Moorish Castle and the Capuchos Convent, built in the 16th century.

You’ll arrive in Lisbon airport and drive 35 minutes south west to Cascais. However the city of seven hills is a city not to be missed. For sights and information log on to www.visitlisboa.com

Lisbon is a great city to shop in. Prices are less expensive than any other Western European city. You can also get a train very easily into the centre for a few euro and try out the nightlife. The Barrio Alto district is the main area where you will find people crowding the streets until the early hours. Then they head on to nightclubs such as Lux, Club W and Kapital

High street fashion shops can be found in the Baixa area, especially the pedestrianised Rua Augusta (for clothes, shoes and luxury goods from the likes of Louis Vuitton and La Perla) and the Chiado and Bairro Alto (especially Rua Garrett for clothes and linen and neighbouring streets for ceramics, young designer fashions and haute couture). Avenida da Liberdade hosts big name fashion such as Calvin Klein and Emporio Armani.

One stop new shopping malls are becoming increasingly popular; the best being the Centro Vasco da Gama, with its own cinema, restaurants and shops like Zara, Pull and Bear, Bershka, Mango, Dali, Massimo Dutti. For more info log on to www.centrovascodagama.pt

Two massive local football teams divide the city – tickets for Sporting Lisboa or Benfica can usually be bought on the day at the stadiums.

For info on the Portuguese league check out www.footballportugal.com
Cascais is only a 30kms from Lisbon airport (see map below). It a 35 minute drive approximately. From Lisbon centre it takes 25 minutes approximately.

How to get to Cascais from Lisbon Airport:

Car Hire - We have a discount car hire section on our website where you can rent a car.
Cascais is the perfect place to learn how to surf. The town is surrounded by many different types of beaches. The best beginners/intermediate surf beach is Guincho (pronounced Ginchu) 5 km's north west of Cascias town. It's a beautiful kilometre long stretch of beach.

Further north are two excellent beginners beaches Praia das Macas & Praia Grande. They are well worth the trip as they will take you past Cabo da Roca, mainland Europes most Western Point with a pretty impressive cliff top view.

A few hundred metres East of Cascais is Monte Estoril beach which has a small righthand wave that breaks regularly. There is a car park at its base accessed from a slip road above.

Follow the road east of Cascais along the Tagus river (Tejo in Portuguese) towards Lisbon and you will come across beach after beach offering a vast amount of surf: Bica is a great longboarders break on Sao Pedro beach. The beach has a few surf bars and restaurants and is a great place to spend the day.

Closer to Lisbon is Carcavelos beach - as the Stormriders surf guide call it: "the original and still one of the best Portuguese surf spots". Its a very consistent beach break and home to some of Portugals best surfers.

Its also worth taking the trip across the river Tagus to Costa Caparica - driving over the spectacular Ponte 25 de Abril bridge leaving Lisbon behind you. Costa Caprica is a 30 km strip of coast with some of the most consistent surf in Portugal.

Come Surf Cascais with us....

Unlocking after Covid - with The Surf Experience in Lagos

Surfholidays.com's Nicky Kelly catches up with Toby Millage of the Surf Experience in ...
read more
1 month ago 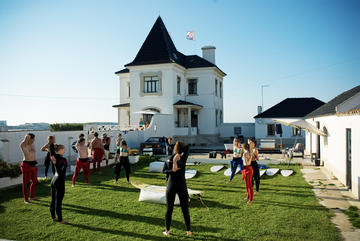 5 of the Best Portugal Surf Camps 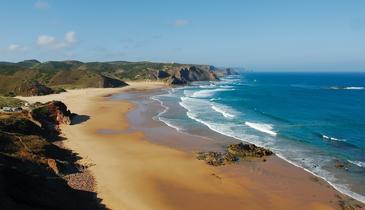 The Top 7 surf beaches in the Algarve, Portugal

Our official Top 7 surf beaches in the Algarve, Portugal!...
read more
5 months ago