Surfing in the 50s 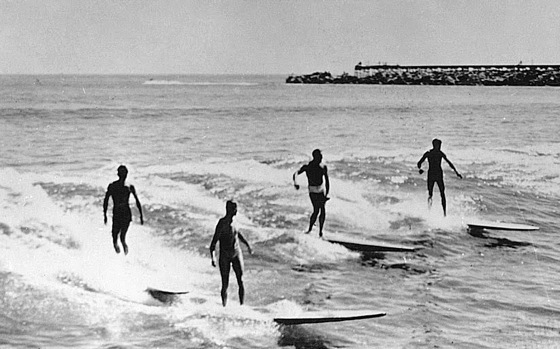 What is it about surfing that is so welcoming and freeing?  The ocean doesn't care what you look like, or how you feel about yourself in that moment as you wade into its waves.  As soon as your body lies on your surfboard and your arms start to paddle over the waves, there is a peace and joy that increases.  There is nothing like the sensation of just paddling out into the surf, whether it is on a shortboard or longboard, being at peace with the ocean has always captured the heart of surfers... and this is as true today as it was during the 1950s, when the art and sport of surfing won over people around the world..
Today we all know the hype that surrounds surfing, it is exciting and exhilarating, whether it is watching from the shore, viewing the contests online, or even escaping away for a surf holiday for ourselves.  Yet in previous decades, where communication wasn't so easy or overwhelming, surfing was something that you experienced first hand or maybe by watching a rough surf film in a local cinema. 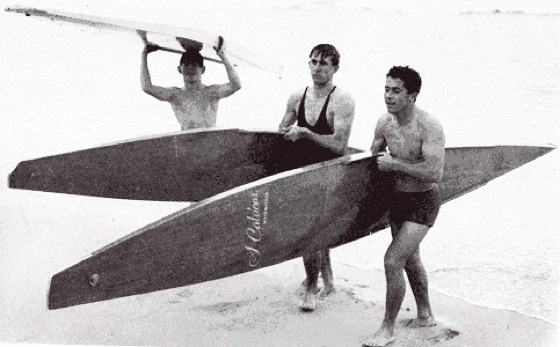 In the 1950s when mainstream meant being conservative, fitting in, and welcoming the restoration of life after the horrific aftermath of WWII; surfing was something else entirely.  Whilst the world watched in horror at the developments of more nuclear bombs, the creation of the Iron Curtain, and the battle between Communism and Capitalism coming to a head, the ocean brought with it a siren song for surfers.  To escape from the ‘supposed to' expectations of everyday life, and a chance to just feel the waves, to be in the moment and enjoy being in nature.
Before reaching the revolutionary Sixties, when wetsuits would start to appear and shorter surfboards would arrive at the end of the decade, the Fifties were quieter in comparison- yet no less revolutionary.   Riding new lighter wooden longboards, surfers were able to take their boards anywhere, and maneuver their boards in the surf like never before. Artfully turning the board into the cresting wave, riding for longer, walking up and down the length of the board became a norm, not just pointing the board directly to the shore and going in a straight line.  There was more choice in surfing, in both the way you surfed, and what it represented. 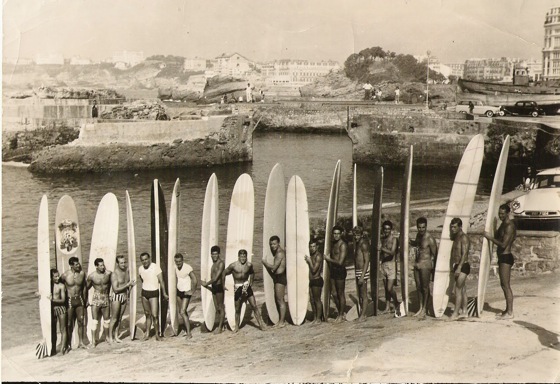 What would become the ‘beachbum' stereotype started to form in the Fifties, when young men and women would choose surfing over jobs and commitment.  It was a form of rebelling from conforming to society's demands on them, and offered possibilities and freedom around the world.  Surfers were a version of a rebel without a cause that was such a theme in everything from films to music in the 50s.  However, there was another history changing development about to take place in the surfing world...
For decades the legendary Duke Kahanamoku had been taking the sport of surfing around the globe, yet it wasn't until the 1950s that it was finally going to be introduced to Europe.  Whilst travelling, American surfers started to take their longboards out into the waves of La Cote des Basques beach in Biarritz, France.  The sport of surfing had suddenly been introduced to France and to the rest of Europe.  People loved it, and it soon gained in popularity.  50 years on, the legacy of the 1950s lives on, as Biarritz and the surrounding coastline is still considered the capital of surfing in Europe.  You can even surf the same spots that began it all in the Fifties, just take a look at our pages for surfing holidays in France to get a feel for why the Americans had to get out into the waves.

Service in the Sun 1957 edit from Gary Crockett on Vimeo.