Ericeira surf spots are renowned for their level of consistency across all level of surfers, their water quality and the uniquely beautiful surrounding, so much so that the area was officially recognised back in October 2011, when it was named as a World Surf Reserve. Ericeira, pronounced Eery-Say-Reh, is the surf capital of Portugal, often described as a Surfing Mecca due to its abundance of waves.

To give you a taste of what’s waiting for you, we have listed 9 of the best Ericeira surf spots and categorised them into beginner, intermediate and advanced level. 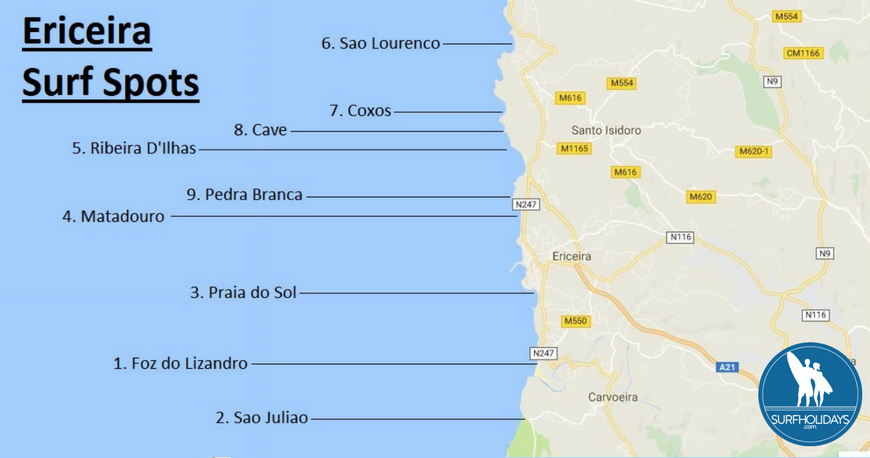 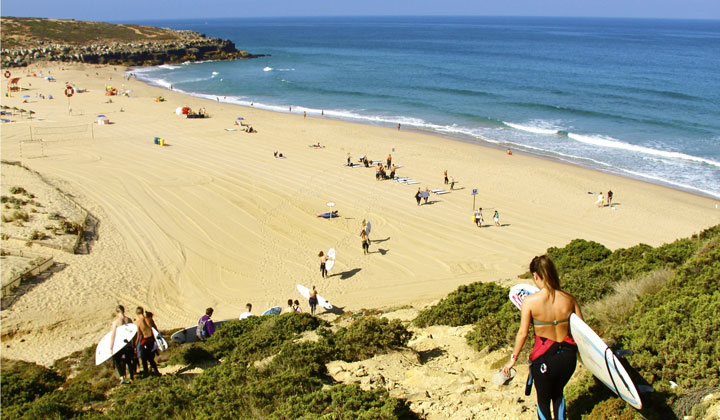 Foz do Lizandro is great for beginner surfers as it’s got a variety of peaks and breaks over a sand bottom which is best surfed on an incoming mid-tide.

The surrounding beach area was developed in late 2008 and offers all the amenities that you need for a day at the beach, and has a variety of cafés that serves delicious food and drinks that offer the perfect spot to refuel in between sessions.

Most popular choice for surfing close to Foz do Lizandro: 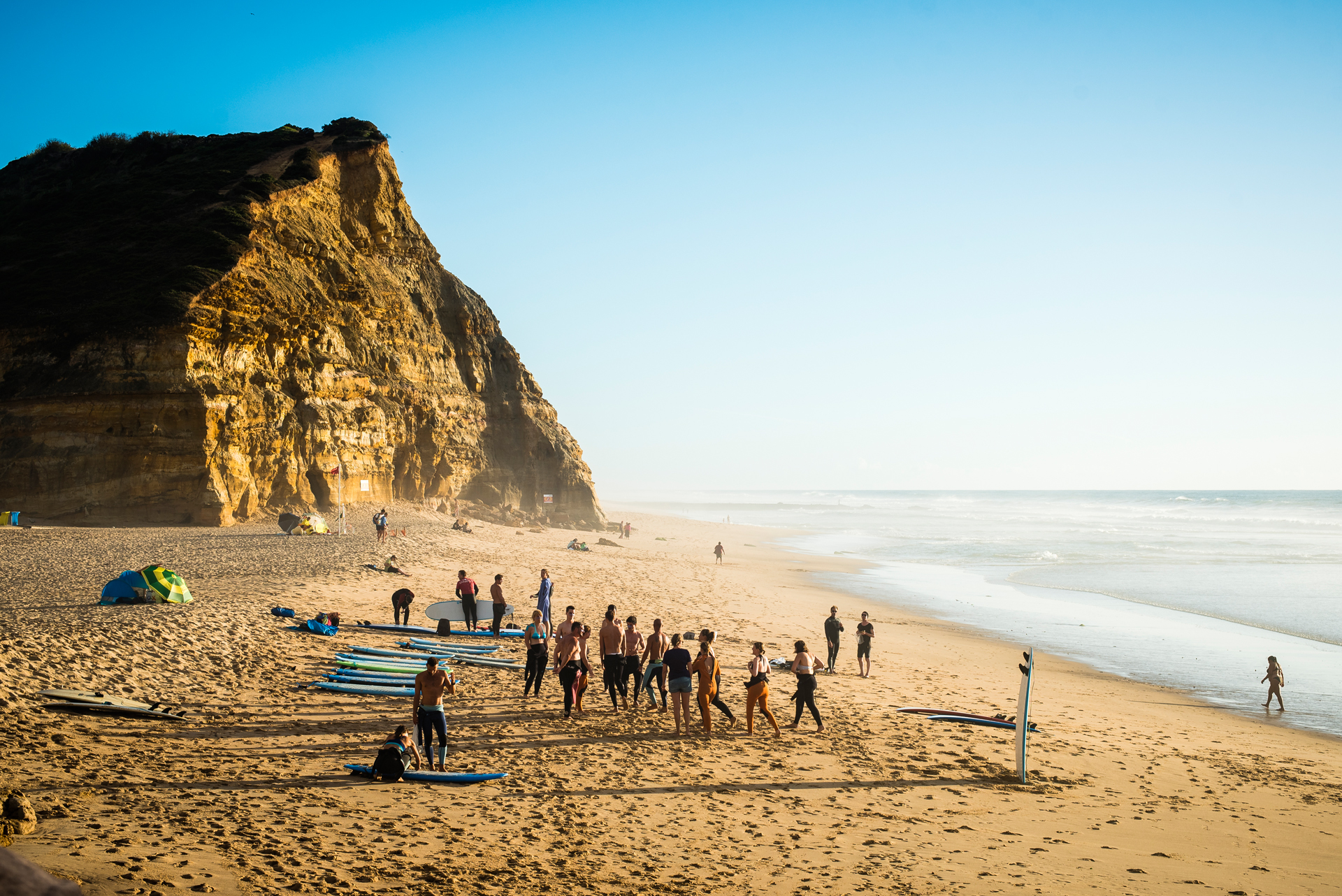 Sao Juliao is a big sandy beach found at the southern end of Ericeira and picks up the most swell in Ericeira, making it the most consistent wave in the area where you can often find a great wave when everywhere else is flat. The big stretch of beach offers a multitude of peaks that provide great beginner walls at all stages of the tide, where you can often find a peak to yourself.

Most popular choice for surfing close to Sao Juliao:

Praia do Sul in the south of Ericeira is one of the most beautiful in the area and is a brilliant option to head to when a big swell is pouring in. The break offers both left and right walls that wall up slowly before gaining speed on the inside making it one of the best Ericeira surf spots for beginner surfers with a few sessions under their belt.

Great amenities such as food kiosks, cafés, restaurants and toilets make this beach a great location to spend the day or even the whole week!

Most popular choice for surfing close to Praia do Sul: 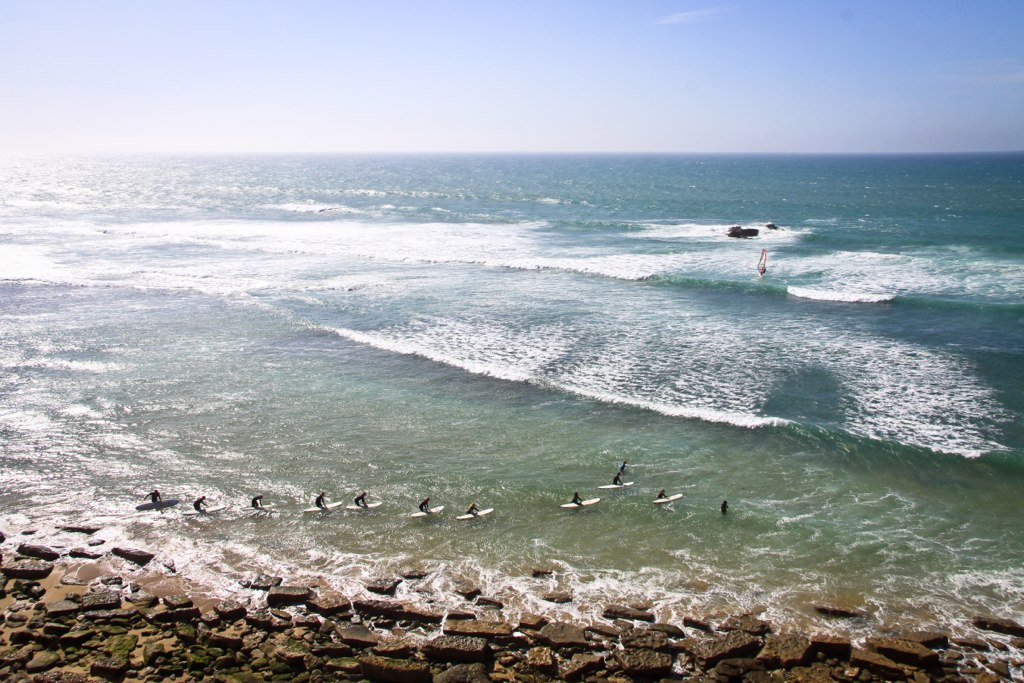 Matadouro is located just north of Ericeira and offers left hand rides to the south of the beach and a super fun right hander towards the north end with multiple peaks in between.What we love about this break is that there’s also a skate park overlooking the break, giving you the chance to shred the concrete in between sessions in the salt as well.

The Beach has a little mobile coffee shop in the carpark and overlooking it is the one of the best accommodation options in Ericeira, Villa Ana Margarida Beach.

Most popular choice for surfing close to Matadouro beach: 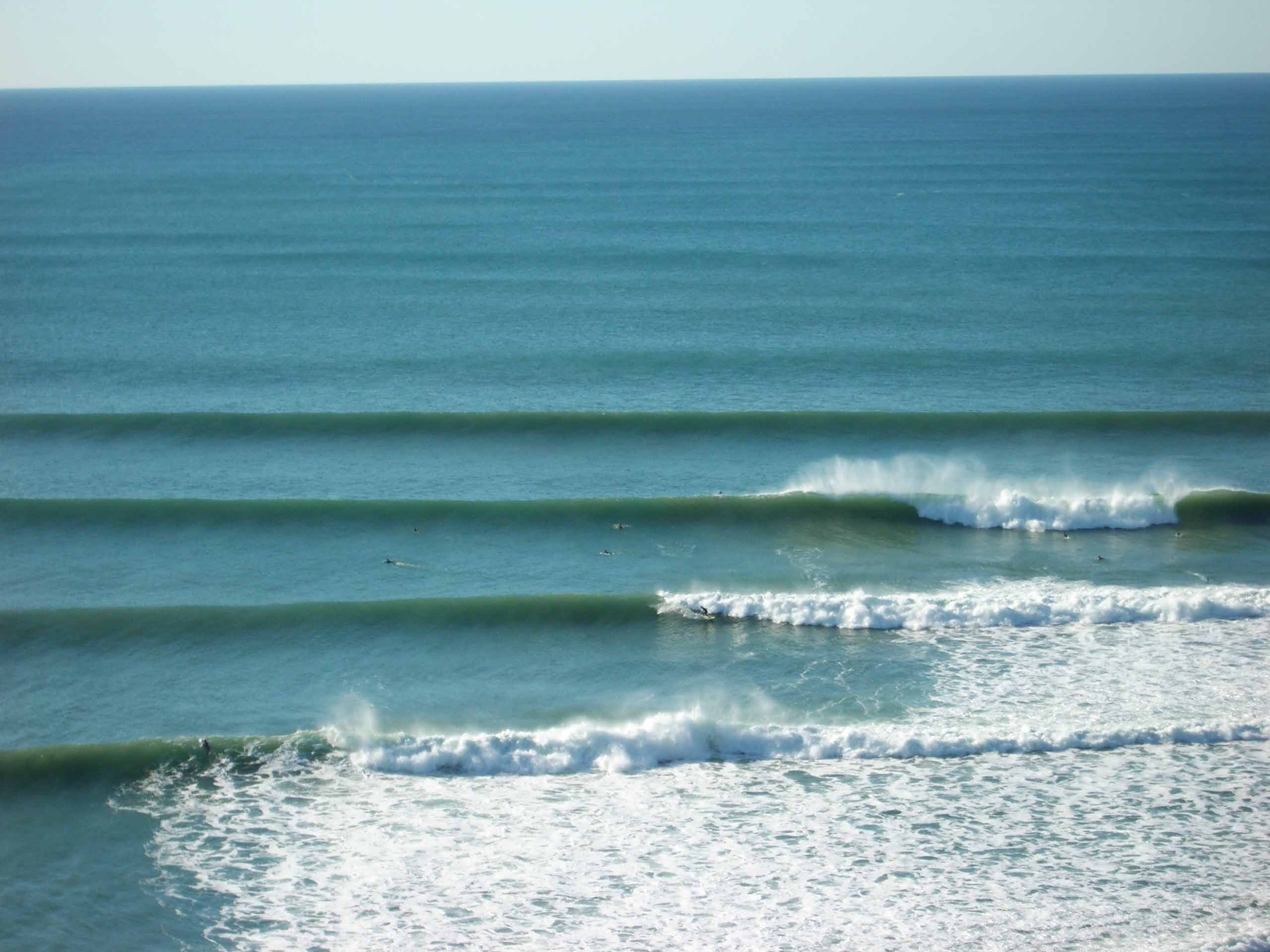 Easily Ericeira’s most accessible reef and fortunately the most forgiving too, Ribeira D’Ilhas dishes out super long right hand point break walls that not only offer up barrels, but big shoulders to practice your turns.
It’s home to many professional contests due to the quality of the wave, it’s consistency and the top quality amenities situated nearby.

The beach has a number of surf schools including Blue Ocean , and a great surf restaurant where you can watch the sunset and wind down after a days surf.

Most popular choice for surfing close to Ribeira D’Ilhas:
nightly from

Sao Lourenco is a beautiful sandy beach that's home to multiple peaks offering heavy left and right walls. Towards the northern end of the beach you'll find a right hand reef that when a large swell is running can produce one of Portugal's heaviest and best waves.

Most popular choice for surfing close to Sao Lourenco: 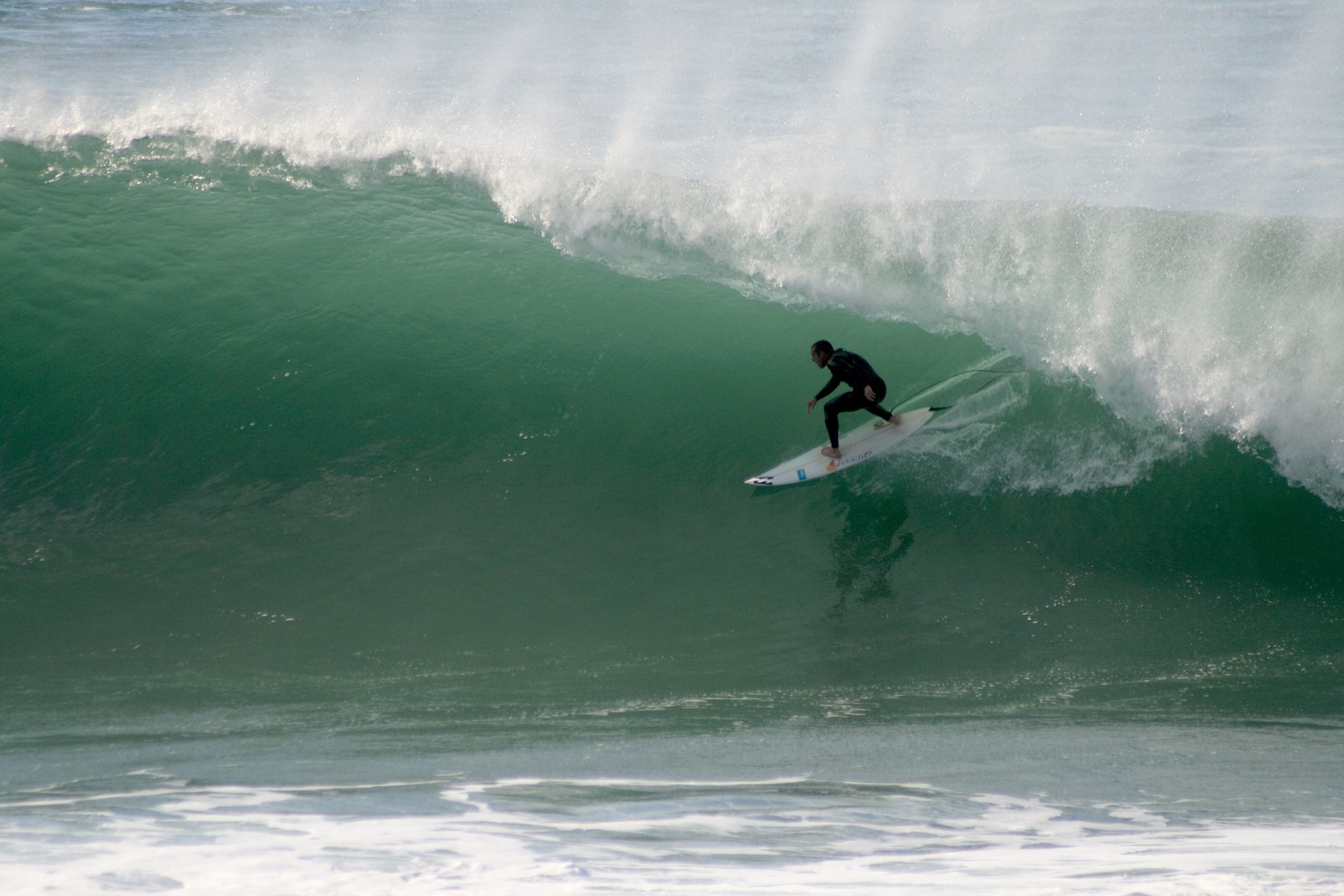 Considered not only as one of the best waves in Portugal, but one of the best right handers in the world, Coxos is famous for it’s big barrels and leg-aching rides that will leave you mesmerised! It’s wave that every experienced surfer should have on their bucket list!

Most popular choice for surfing close to Coxos:

Cave is often compared to Australia’s Shark Island, and once you set eyes on this marvel of the ocean you’ll see exactly why! A right hand reef break that comes out of deep water before hitting an extremely shallow reef ledge, creating double up waves that are as thick as they are hollow, before going going dry on the end section.

It dishes out some of the biggest spitting barrels in Portugal as well as some of the worst wipe-outs. Best surfed by only the most experienced of surfers

Most popular choice for surfing close to Cave:

Pedra Branca is a very powerful left hand reef break that offers one of the hollowest tubes in Ericeira. In theory all you have to do is get to your feet and pull in and cut out for one the rides of your life, but that’s in theory, it can also deliver the wipe-out of your life if you don’t get enough speed. Pedra Branca is simply just pure tube-riding and speed... They say the best things are normally the simplest, so why not find out for yourself on your Ericeira surf trip with a session at Pedra Branca?

Most popular choice for surfing close to Pedra Branca:

Ericeira is a fantastic place for a learn to surf holiday with a variety of fun beach-breaks that give you the perfect walls to learn the basics, and for the more intermediate and advanced there is a host of world class reef breaks offering up left and right-hand barrels and walling point-breaks that you can carve up to your hearts content.

Another attribute that makes Ericeira surf holidays so popular is it’s accessibility, situated only 40 minutes from Lisbon and 30 minutes from the airport, making this a great destination for a quick and easy surf holiday getaway.